When: Friday the 19th of August at 19:00
What: opening of the mural, an exhibition and a conference
Where: Gallery Krzywogoniec 53

On Friday we are celebrating the opening of the mural at our Gallery.  The same evening we invite you for the exhibition of two artist: Anna Kluza and Anna Waluś.

The program includes also a presentation of works combined with the screening of a film created using the painting animation technique and a talk on painting murals in public space.

The authors of the works are Anna Kluza and Anna Waluś, artists who met during the production of the Oscar-nominated first in the world, full-length painting animation “Twój Vincent”. After finishing work on the film, they continued their cooperation by painting murals and participating in various joint artistic ventures, such as exhibitions, meetings with authors and artistic plein-airs.

Anna Kluza also collaborated with the Easy Tiger film company on the short film ‘Vilains’, which will be screened during the meeting. Anna Kluza is currently working with the BreakThru Films studio painting shots for the latest film production, “Chłopi”.

Anna Waluś is the co-founder of Wow Wall Studio, a group that has been active in Poland since 2016, creating original and commercial murals. She is also the author of many illustrations that can be viewed, among others on textiles, covers, posters and murals.

The meeting will be accompanied by an exhibition of the artists’ works. 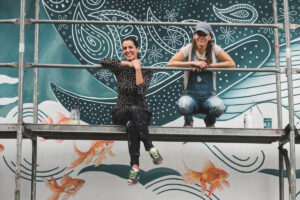